How Does Government Differ from Business? 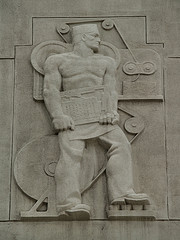 I mentioned this once to a friend with Republican tendencies and she said, “That’s right. Government should be run like a business.”

My immediate response was, “But a government is not a business!” Which, of course, got me thinking about how governments and businesses differ.

For simplicity’s sake, I define a government as that organization responsible for establishing and maintaining order within set geographic borders, borders which it is also generally the responsibility of said organization to secure, if not necessarily establish.

By contrast, I define a business as a set of related processes which facilitate the delivery of a good or service within a larger macro-process of exchange which usually depends on an consensually accepted token of value (currency) and a set of rules enforced by a communal agency (which may be a mob or may be a government).

Now consider these definitions in light of Allen Weiss’ comment that most Web 2.0 “business geniuses” seem to ignore “what a business is supposed to do..namely, make a profit.” On the one hand, I find in this formulation one important differentiator between government and business: Making a profit does not enter into my or any definition of government or its purpose.

On the other hand, I must point out that I did not define business in terms of making a profit either. This was intentional because I do not believe that the purpose of any business is, in the first instance, to make a profit. Aside from delivering the good or service around which it is organized, the main purpose of any business is TO STAY IN BUSINESS. Making a profit may serve this end, but it is not an unqualified necessity.

Now, returning to the original question of government and business, would it be fair to say that the purpose of any government is to stay in power?