A Brief History of #onewordwednesday 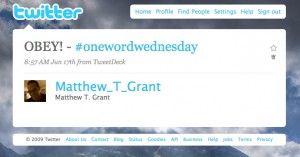 I quickly discovered that I was not the first person to use this expression. That honor goes @markdudlik, who was about a month ahead of me. By the way, he’s a scientist. Of awesome.

The basic rule for #onewordwednesday is: Post at least one tweet containing a single word of your choosing along with the hashtag, #onewordwednesday. I guess I could have gotten more complicated by insisting that all your tweets for the duration of #onewordwednesday be one word in length, or that you should only tweet one word for the entire day, but I wanted to keep it simple, for good or ill.

So far, about 38 individuals have contributed to the #onewordwednesday effort with @cristinagordet, @motoole1, and @rsheffield deserving special recognition for their unflagging and enthusiastic support of this quixotic endeavor. I would also like to point out that #onewordwednesday would have been strangled in the cradle had @devinusmaximus not reached out and inspired me to keep hope alive in the early days of our movement. Devin, you are the wind beneath my wings.

The future is unwritten, as the Clash used to say, and I do not know whither #onewordwednesday is bound. I like that a kind of game is developing in which people retweet a #onewordwednesday word and add a related word. That sort of thing can only go so far given Twitter’s character limit, but it emerged spontaneously, which I find promising. Who knows what the day after tomorrow might bring?

The other idea I had was to choose a word, like “focus,” and see how many people we can get to tweet, “Focus #onewordwednesday.” In addition, we could retweet any random tweet containing the word “focus,” adding the hallowed hashtag as well. Are you game? Let’s do this.