It’s Not About Money

Better a debtor than pay with a coin that does not bear our image!
– Friedrich Nietzsche 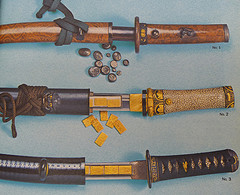 I’ve never been motivated by money.

Well, that’s not entirely true. I have been motivated by money to the extent that having money, or a relatively constant source of it, was necessitated by the need for food, shelter, and a modicum of creature comforts.

More precisely put, I’ve never been motivated to undertake a particular course of action or engage in a particular pursuit because it could potentially or even reasonably result in the acquisition and/or accumulation of wealth. I’ve just never cared that much about having money or having the more luxurious and extravagant things the enjoyment of which money so famously facilitates.

Rightly or wrongly, I’ve always viewed money as kind of hassle, albeit the kind of hassle that you have to deal with because, eventually, you run into other, bigger hassles that require money for their ultimate or timely alleviation. Put another way, money is the “ur-hassle” (which may be the source of money’s status as the root of all evil).

The strange thing about money, of course, is that it isn’t really anything. It has the kind of being that the philosophers and theologians refer to as “contingent.” Money, which in this era of floating exchange rates and electronic funds transfer has even lost its traditionally material substance and standard, depends on a host of non-financial entities to retain the appearance of value and fungibility. In the absence of these entities – rule of law, a functioning state, an implicit social contract, etc. –  money is quite literally not worth the paper it’s printed on.

Now, you will frequently hear folks say, “Money is the only way we have of measuring value.” While I tend to bridle at the simple equation of money and value, I get the point. If someone is willing to give you money for a good or service, you know it is worth something, as opposed to nothing. If, on the other hand, they would take it if it were free but pass it by if they had to pay, we can safely say that whatever value they may ascribe to it is so capricious as to be negligible.

Closer to the truth is something a CEO I once knew used to say, “For businesses, money is like oxygen: oxygen isn’t the point of life, but without oxygen, no life.” This fits my own notion that the most basic goal of any business is to stay in business. Money can help you achieve that goal, which is why people frequently confuse it with the goal, but it is not the goal.

This sentiment was reiterated by the Joker in The Dark Knight when he said, as he set a towering stack of bills alight, “It’s not about money; it’s about sending a message.” This spoke to me because I’ve always valued the currency of language, thought, and sentiment above all else and have thus been drawn to prize the achievements, or at least the efforts, of writers and musicians, thinkers and teachers, firebrands and demagogues.