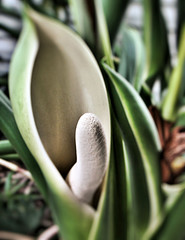 Remember when I said that science was Satanic not because it advocates evil but because it sees moral distinctions as epiphenomenal and, in the end, insists that all reality consists of a meandering, entropic unfurling of energy through myriad states of transient, quantum differentiation until an ultimate universal state of uniform heat death is achieved?

Well, it turns out that I was right. You see, the Hebrew word “bara,” which has traditionally been translated as “created” in the the first sentence of the book of Genesis – “in the beginning God created the Heaven and the Earth” – also means “to separate” and, according to Professor Ellen van Wolde, a “respected Old Testament scholar and author,” that first sentence should reflect that God “separated” rather than “created” the Heaven and the Earth.

Anthropologically speaking (at least from the structuralist perspective), the function of religious belief and practice is to make distinctions between the sacred and the profane, human and animal, good and evil, etc. Thus, it is only fitting that the deity’s original creative act consists in drawing a line.

God may have created the Heaven and the Earth but only in the sense that you create two things by dividing one thing. Of course, such a division implies that you have “one thing” to begin with and, indeed, van Wolde’s re-translation of Genesis suggests that there was something there, both temporally and spatially, before God. This single, undifferentiated thing, the opposite of God, is essentially nothing, since anything that is not separated into things is quite literally “no thing.”

God is the Great Divider and the real Devil, the “other” of God, is not another being but this pre-separated stuff: the “no thing.” The irony is that God, too, is not a thing, and it is this “no thing-ness” of God which makes monotheism practically indistinguishable from atheism.

But if all this is too high-falutin’ for y’all, here’s the marketing lesson that I draw from these meta-theological divigations: Differences (between products or services or whatever) don’t exist, they are made.