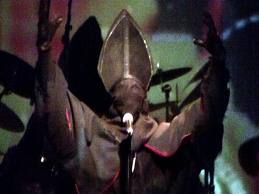 Before doing so, I need to make a remark or two about the sub-genres of death metal. Death metal arose out of the more extreme arm of thrash metal with Celtic Frost/Hellhammer, Venom, and Slayer serving as the music’s three-way paternal grandparents. What death metal inherited from this infernal union was technical virtuosity, primitive or intensely psychotomimetic vocalization, shockingly graphic or profane imagery, and a sense of the “epic.”

This latter sub-genre is germane to our present discussion because Portal makes unique use of some of its essential elements. While technical death metal is distinguished by the number and frequency of notes in a musical phrase —an aesthetic point that puts it in league with both bebop and virtuosic romanticism à la Liszt, Paganini, and Rachmaninoff— black metal is marked by a distinctive rapid strumming of often relatively simple or short musical phrases.

In addition to this feature, however, black metal is also frequently distinguished by amazingly lo-fi production. The result is a music that seems universally distorted, tinny, and authentically creepy. It is this in particular that Portal has successfully appropriated and that gives their approach to technical death metal —for the riffs here, when they can be adequately parsed, are as byzantine as anything penned by Morbid Angel or even Suffocation— its revelatory and idiosyncratic character.

Which is not to say that this music sounds like it was made on a 4-track in your mom’s basement. Rather, it is to highlight one of its most arresting facets: the treatment of the guitars, a rusted melding of grinding buzz and the tattered cardboard brittleness of over-loud signal forced through torn and cheap speakers. By contrast, the drums are presented with a plastic clarity and the vocals, breathy and guttural, with an alarming naturalism.

If Portal borrows anything else from black metal, it is the churning invocation of chaos, chaos of the sort that provokes a panicked feeling that everything is moving too fast and someone is about to die. Traditional technical death metal, with its emphasis on mechanical precision and ultra-ballistic speed, is more tightly wound. When chaos does arise, such as in the solos of Morbid Angel’s Trey Azagthoth (an approach itself borrowed from Kerry King and Jeff Hanneman), it is as an ornament, not a core element (as in the music of Emperor, for example).

The swarming chaos called forth by Portal on the other hand, enhanced at times with tape loops and delayed sound montage as in “The Endmills” or “Glumerphonel,” is practically organic. It’s movements more those of a creature than a machine; it’s rhythms death-throe spasms. Surging and lurching, it generates an atmosphere simultaneously claustrophobic and expansive, smothered in the infinite. I’ve really never heard anything quite like it.

I’ve never seen anything quite like Portal either (though I guess I came close when I saw the Mentors, heads hidden by black hoods in the basement of the Cathay de Grande),  though their eccentric, monochromatic stage attire indicates the lengths they are intent on taking their aesthetic vision:

“Portal proposes that only total darkness in states of mind will show the way to absolute completion.”

Lenin once wrote that philosophers all yearn to build cults around themselves. Well, the era of the charismatic philosopher surrounded by intelligent disciples has long past. Today, the only ones who have the audacity to advocate a particular way of life or articulate an elaborately fabricated vision of and for the world are artists like Portal. In fact, what makes death metal, and not just their unique and compelling brand of it, so powerful (and dangerous), is that, like Videodrome, it has a philosophy – an aesthetic, an ethics, a politics, metaphysics – and specifically one that melds the darkest, most corrosive nihilism with a vigorously willful creative energy.

“PORTAL was chosen due to unfathomable imaginings of horrible evil seeping into this dimension, that which we have opened, that which we are,” the band’s guitar player and co-founder, Illogium, is quoted as saying.

Portal are the destination and the path, the 36th Chamber. I bid you enter.