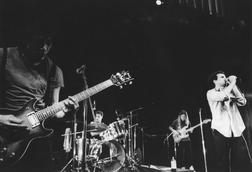 Saccharine Trust got under my skin because they were so weird. Although Baiza was undeniably cool, playing with an otherwordly, quasi-shamanic concentration, Brewer was just dorky, strange, and, I guess, scary in an erratic, “what the hell is up with this guy?,” sort of way. A few months later, while going through the bins at Rhino Records in LA, I found a copy of their album, Surviving You, Always, and bought it.

It was a difficult record. While I could fit the Minutemen into the music I’d been listening to for a while (they struck me, at times, as a punkier, pithier, and more political Talking Heads, for example), I couldn’t really place Saccharine Trust. Sure, they covered “Peace Frog” by the Doors—without sounding remotely like the Doors—but other songs like “All in a Good Night’s Bleeding” or “The Giver Takes” were avant, almost mathy (post?) hardcore. And “Yahweh on Acid” was a long, multi-layered, slow-burn freakout with Jack Brewer’s poetry draped across it like intestines before a haruspex.

I decided that I was going to like this record no matter what, so I put it on every day and listened to it until it became familiar and, slowly, comprehensible. Soon, I was listening to it because I actually liked it—to this day I think that “Our Discovery” is one of the great songs of that bygone (mid-80’s/LA punk) era—and would play it for my friends as an aesthetic litmus test: Could they dig it or not? How open were their musical minds really?

Compared to Surviving You, Always, their follow-up, World Broken—an entirely improvised live album with Mike Watt on bass and Jack reciting poetry or, on one song, reading at length from the second book of Samuel—could almost be considered accessible. Mike Watt’s swinging melodic bass certainly served to anchor things firmly in the known musical universe and even allowed Baiza’s raggedy psychedelia and Brewer’s warped ecstasies to shine in their most flattering and downright visionary light. I listened to this record a lot. (Listening to it again while writing this, I’m struck by how great it sounds—trippy, majestic, disturbing, funny, feral—we need more music like this.)

In the end, Saccharine Trust became a band that mattered to me; they made a difference to me and made me different. Joe Baiza’s guitar playing inspired the acid-tinged, Jerry Garcia-meets-Greg Ginn approach I favored way back when, and, more importantly, Jack Brewer, in all his unselfconscious and damaged dorkiness, actually encouraged me to be weird in my own way, on and off stage, and showed me that if you obey your own idiosyncratic muse, while you might create something that is difficult to like and even odd to the point of embarrassing, you might also create something truly original and, in its way, ineffably immortal.