Who is Matthew T. Grant?

Matthew T. Grant has chosen as his tag-line, “Tall Guy. Glasses.” He has done so for several reasons. First of all, he is above average in height for the human male (6′ 7″). Second of all, he wears glasses (I’ve been told that contacts are out due to my astigmatism. If any opthamologists are reading this and believe that I am misinformed, please contact me at mtg_at_matthewtgrant.com).

The most important reason for this fairly pedestrian tag-line is that I, Matthew T. Grant, have a variety of interests, several well-developed abilities, and a non-linear career path. I have established and run a corporate training department, directed an array of internal and external communications efforts for a global company, served as a business process consultant, taught at several colleges, and performed in a number of rock bands in San Francisco, Boston, and Ithaca. I received my PhD in German Studies from Cornell University (1993) and wrote my dissertation on mass media and political militancy in West Germany in the 1970s, My bachelor’s degree in German Studies was granted by Stanford University (1985).

As far as my aforementioned abilities are concerned, those that may be of most interest to you as an individual or representative of an organization are as follows. I can write real good (that grammatical incorrectitude was intentional). I’ve been involved in blogging, podcasting, and various online communities for years. I’m an entertaining and informative presenter (that link takes you to the slides for a recent webcast I conducted. To hear the ‘cast itself, go here – it’s free, but requires registration). I am also extremely comfortable hosting large events as well as facilitating small discussion groups.

Allow me to illustrate this ability in action. While serving as corporate spokesperson, I enlisted our local field managers to find me speaking engagements by telling them, “I can talk about anything.” The then-manager of our Osaka office took me up on my offer and said he had me scheduled to speak on “business method patents” at a large conference in his native city. I told him I didn’t know anything about that and he responded with, “But you said you could talk about anything.”

Hoisted on my own petard, I delved into the controversy surrounding the patent Amazon received for their “one-click” buying method and gave a presentation to three hundred Japanese business folk calling for greater openness and flexibility with regards to intellectual property in the Web era (you could call my approach anachronistically, “Lessig-esque“). Although the audience seemed more interested in learning how to make money from patents, rather than how not to, nobody said I didn’t know what I was talking about.

So, that’s Matthew T. Grant, in nuce. This blog will now return to its regularly scheduled programming. 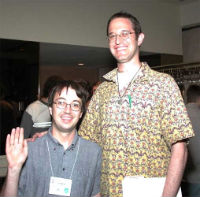 The Medium Is (still) the Message

Anyone familiar with Marshall McLuhan, and even those who aren’t, have heard his famous line, “The medium is the message.” What this one-liner says in a nutshell is: the content of any particular medium matters less than the impact it has on the people and societies using it.

McLuhan effectively reiterates Heidegger’s perspective on technology which insisted that the essence of technology was nothing technical, but, instead resided in a tendency to view the world, human beings included, in terms of resources. This tendency is best illustrated by the Anglo-American habit of referring to forests as “woods.”

While McLuhan’s theories were rightly associated with mass media like radio and television, it’s important to note that his thoughts on media were first formed through consideration of the “Gutenberg Galaxy.” As Clay Shirky recently pointed out, to describe the world prior to or following a completed revolution is relatively easy – describing a society, a community, or a technology in revolution, is exceedingly difficult.

That’s why I was interested in in Greg Verdino’s comparison of Twitter and Second Life. While I agree with him that there are a lot of similarities in these media as well as the hype surrounding them (I myself called Twitter a “one-dimensional Second Life”), I found it far more illuminating to read, “As marketers, business people and just plain old people, we need to look beyond the story (“hey everyone, shiny new thing here”) to find the story behind the story (“we are staring into the eye of a significant new truth.”)”

The medium is still the message. Twitter isn’t about the people on it or individual “tweets” or even the platform. Verdino seems to think it’s about presence and instantaneous connection. That sounds right to me, though I don’t think it captures the entirety of Twitter as “a signficant new truth.” To get at that, we need to resort to old science of hermeneutics and ask, “If Twitter is the answer, what is the question?”

Mar 22, 2009 Comments Off on Web Design as Orchestration

The last post I published for Aquent’s Talent Blog was on the topic of aleatoric design. It was a response to the much maligned Skittles website reconception. The main point I wanted to make was this:

Of course, Skittles, with the aid of Agency.com, are following in the footsteps of Modernista!, who took their own website in this direction last year. Still, the fact that a consumer brand has emulated a trendy design shop has got everybody talking, including the ever articulate (and strikingly handsome) David Armano, who rightly predicts, I believe, that we’ll see more of this, not less and goes on to link the Skittle move to the emergence of “sponsored conversations.”

But what is this “this” that we’re going to be seeing more of? I think it’s something we could call “aleatoric” design which takes advantage of the fact that web pages, in the end, exist as a set of instructions to be executed by a browser, not a fixed arrangement of text and image (as in the print world). Since these instructions can be linked to dynamic sites themselves (Twitter, YouTube, Wikipedia, etc.), design now becomes the quasi-symphonic arrangement of fluid elements that resist control or even predictability.

Interactive design is more and more “orchestral” and less and less “graphic.” Accordingly, I think we should think of web “sites” as “stages” where content “occurs” or is “performed.”

You’re Nobody ’til Somebody Monetizes You

The other night I attended a presentation by Dan Schawbel, “the leading personal branding expert for Gen-Y.” His approach to personal branding – the art of marketing yourself – is very methodical and he communicated it in a clear, practical way. Indeed, this blog is itself the direct result of some of the advice that Dan provided. Specifically, he said that you should own your name as a domain so I went home, registered “matthewtgrant.com,” and within a week I had this blog up and running.

Now, I’m no stranger to the discussion/debate around personal branding, having addressed the topic several times on Aquent’s Talent Blog, but I must admit that I’ve always found the concept de-humanizing. Aside from the notion that “branding” stems from the cattle trade and involves a painful, flesh-searing procedure, personal branding essentially calls for reducing one’s inevitably complex and even contradictory identity to a tag-line and one’s character to a commodity. This process was summed up by a grad school friend of mine who described his approach to the job search with the phrase, “I am a box of Tide.”

To the extent that “personal branding” means “understanding your capabilities and being able to clearly articulate them to people who may be interested in paying you for services rendered,” I’m all for it. In fact, I strongly believe that finding a job or landing a project depends on your ability to connect with a “target audience” (client/hiring manager), differentiate yourself from the competition (other vendors/job seekers), and persuasively communicate the specific ways that you will provide value and meet specific needs (marketing).

In other words, within the limits of one’s worklife something like “personal branding” unquestionably has it’s place. I do not believe however that it should be applied to all aspects of one’s life as some sort of path to enduring, personal fulfillment. Still, that seemed to be precisely what Mr. Schawbel was suggesting when he said,  “You need to monetize your passion because that’s how you find true happiness.”

I understand that “making money doing what you like to do” is a widely accepted ideal. Nevertheless, I believe the contrary to be true: True happiness comes from doing what you like without consideration of loss or gain. To achieve that end, I believe we need to be able to monetize, not our passions, but the necessities of life. I mean can we envision a better “job” than getting paid to eat, sleep, and go to the bathroom?