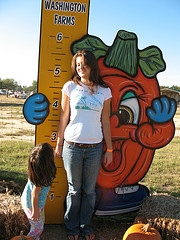 As usual, I’ve been thinking about ontology a lot lately (I mean, who hasn’t?) and specifically what distinguishes some-thing from no-thing.

While I strongly lean to the nihilist perspective, which leads me to believe that nothing, after all, exists, I’m really a physicist in the sense that I define “thing-ness” in terms of the physical. For something to be, it must physically be in the universe and we know something to be physically there when we can measure it.

Nevertheless, I’m at times ill at ease with this notion – Can it really be true that the immeasurable does not exist? Can love be measured? The soul? God? – and was reminded of my malaise by this micro-post from Todd Defren which pointed the latter’s followers to some words from Seth Godin on the “coming era of hyper-measurement.”

Among the Godin One’s words, which took as their leaping-off point news that the Washington Post may have laid off a columnist for lagging blog traffic, I found these, “…in a digital world where everything can be measured…,” and then I wept.

Well, “wept” is a strong word, but I did “think” (which often leads to weeping with me as it did my patron pre-Socratic saint) and my thoughts issued into this question: Can “everything” truly be measured in this or any digital world?

Certainly, one can measure many things, including blog traffic, and such traffic may be important if your business model ties ad revenue to number of views or even click-throughs, but can you measure something like the meaning of a writer’s words or the traces they leave in the thoughts and feelings of a given reader? Can you measure the quality of writing? It’s originality? It’s humor?

And if you can’t measure those things in any meaningful way, does it mean that they do not exist and don’t, in a very literal sense, matter?