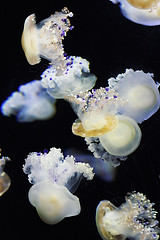 Chaos is our mother.

The entire history of the universe unwinds in the transition of diverse high energy states into a single low energy state. When the universal stuff has achieved a uniform temperature, it will be completely and chaotically disordered. When the energy gradient has disappeared entirely, there will be no identifiable things. “No thing-ness” awaits the universe at and as its end.

The amount of time we spend consciously dwelling on the Earth is vanishingly brief compared to the time it will take for all the energy generated (released?) at the time of the Big Bang to dissipate entropically and, for all intents and purposes, vanish. For this reason, I say that we always find ourselves in the middle of time.

“You can’t miss what you can’t measure.” For something to exist the way that things exist, you must be able to measure it. Does it make sense to speak of a thing that does not exist?

If the existence of something cannot be proven logically or demonstrated scientifically it is irrational to insist that it exists. In other words, it may exist, but only irrationally.

Dynamic referentiality. Our language does not refer to some central lexicon to be used or understood. Instead, it refers to the multidimensional history of its own usage.

That God could call things into being by speaking is an obvious human fantasy which testifies to the fact that words, so fraught with meaning and import, belong to an order entirely different from things. Still, complex sounds, sentences, for example, emitted by subjects with whom we have an affective connection, can have a measurable physiological impact.

Saint Anselm’s Error: To imply that one word or concept is more valuable than another because it refers to an existing, physical object is ridiculous. Words only have a local or situational value.

I would not call myself an atheist but, rather, a nihilist. It’s not just that God doesn’t exist, it’s that nothing actually exists. God exists essentially in the same way that nothing exists.

We are all physicists: physical connections are what we consider “real” and anything that has no physical effect on the world – no measurable effect – does not exist. (Epistemological problem of knowing “things” solely from their effects.)

Does tomorrow exist? Or, to be more specific, does October 15 exist? We indicate it on the calendar. We make plans for this moment in time, even using it as a reference point for current activities. We exchange it as information or as a unit of time basically equivalent to other, similar units – “I can’t meet you on the 7th, but I can meet you on the 15th.”

But a date in the future is not an object like that chair over there because there is nothing that I can do to approach it at will. We must wait for tomorrow or October 15 and we must wait at the speed of time. It takes a year to be gone for a year; you can’t do it from one minute to the next.