How to Reap Benefit for Your Company from Social Media, A Live Blog Report from MarketingProfs Digital Mixer 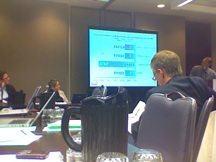 Here’s my attempt to truly “live blog” a Digital Mixer session. In this case, the participants were Aneta Hall from Pitney Bowes, David B. Thomas from SAS, Heidi Ob’bayi from PEMCO Insurance, and the session was moderated by Sean McDonald, Ant’s Eye View.

I’ve tried to capture the discussion as it unfolded but, I must admit, it got away from me at times. The key takeaway I got was this: Because employees are already doing this, and because they are often your best brand ambassadors, you should allow and encourage them to participate in social media BUT make sure that you provide them with guidelines, training, and ongoing feedback. As Aneta said, getting your organization involved in social media and creating policies around this involvement will have a lasting, long-term impact and it will pay to go about this in the right way: with a strategy, an organizational structure, and executive sponsorhip

First idea was that putting a social media policy in place is the first hurdle to overcome when preparing your company to reap the aforementioned benefits. For his part at SAS, Dave started by getting a bunch of people (HR, R&D, marketing, etc.) in a room to discuss the types of policies they wanted to formulate and how they were going to do that. When this group, called the Marketing 2.0 Council, reached decisions it lent an authority to the policies they ultimately devised (the fact that the group consisted of senior managers and stakeholders was the source of this authority). He also said that it was very useful to seek out people with specific objections, talk to them, and see how these objections can be resolved.

During the process of creating policy, Aneta Hall pointed out that you cannot shy away from talking to the C-level executives in order to gauge their appetite for social media, how far they are willing to go, and who among them may be willing to support or sponsor your efforts to create social media policies and strategy. Your role is to help them as a strategist, so you’ve got to do that. She also strongly recommended that you get the leaders of your international business involved or else you will spend a lot of time addressing the legitimate issues and concerns they will inevitably raise.

“Not having a policy IS having a policy,” added Heidi, emphasizing that employees are already active in social media and the organization needs to catch up. With “We lead with trust” as their brand motto, she said, they really needed to lead by example.

Of course, policy is one thing, governance and making sure that your organization is agile enough to respond and engage with social media is quite another. The organizational model adopted by Pitney Bowes, for example, was that of “hub and spoke,” where the “spokes” are employees certified to participate in social media on the company’s behalf and the “hub” is that group responsible for monitoring, capturing, and demonstrating value of the overall effort. Aneta called it, in part, “picking out the social media jewels” which show what is working.

She added that the epiphany comes when you realize that it is not sustainable to try and limit social media participation to a handful of people, hence the importance of training. As far as allowing or even encouraging employees to get involved with social media, as opposed to limiting their ability to do so, Dave pointed out that it’s much easier to find people who are enthusiastic and already ready to talk about your company and train them, then it is to identify “thought leaders” and convincing them to blog or participate when they aren’t necessarily into it.

People had a lot of questions about coming up with policies for industries that are heavily regulated, on the one hand, and for industries where you have a number of employees who may not be particularly media savvy or even loyal to the company. These questions seemed to boil down to, “How do you create guidelines that prevent people from breaking the law or doing stupid things?”

The answer seemed to be, “Keep it simple, even painfully so.” It can be as simple as saying, “Don’t be stupid,” or “Don’t do anything in social media you wouldn’t do at work,” and reminding them, “If you do something inappropriate or illegal in social media, you could get fired.”