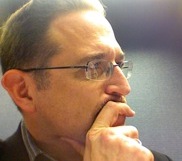 I’ve tried to write this in a more “real-time” way than in the previous Live Blog experiences so, just like reality, it’s a little scattered, disordered, and lurches violently back and forth between the trivial and profound. – Matt

So I was trying to figure out which session to attend this morning and settled on this Twitter one. The moderator, Leigh Duncan-Durst (apparently “Duncan” is her maiden name) got things started by introducing the other panelists, which I found entirely appropriate, except that the first person she introduced was Ann Handley, who like everyone knows because she like has some job with MarketingProfs or something, and then she moved on to Monique Trulson from Brady People ID, who she first referred to as a “smart cookie” but then added that she was a “dinosaur” cuz she’ been on the Interwebs since the mid-90’s, but that got me thinking about “dinosaur cookies,” which I’m not sure what those might be, and, finally, she introduced John Bernier from Best Buy who recently accepted the DMA’s Marketer of the Year on Best Buy’s behalf (oddly enough, John used the word “behalf” about 10 seconds after I typed that word).

John started things off by describing Best Buy’s various feeds (such as Twelpforce) and the technology he uses to push various kinds of messages through them such as when he was at the Rock and Roll Hall of Fame as a seat-filler and tweeted about seeing Metallica on stage and then added that the purpose of these various Twitter streams was to give people a look behind the curtain at Best Buy.

Monique is talking right now. At her prior company (Hello Direct, if I’m not mistaken) she used Twitter to pass along promotions as well as to address customer service issues she came across by monitoring Twitter using Tweetdeck (which I use as well, fyi) and then when she got to Brady she quickly became involved in establishing new social media usage policies and is heading up efforts to educate upper management on the power and benefits of social media.

Now Ann Handley is talking. I can’t believe that she actually dropped Jeremiah Owyang’s name (“Well, I was talking with Jeremiah….”), though I shouldn’t be surprised because she mentioned just the other night that Guy Kawasaki emails her every now and again. Apparently, when she first got on Twitter, she was “literally screwing around under the radar,” whatever that means. Just so you know, Ann is wearing a charcoal grey suit with a royal blue blouse – very regal. She uses Twitter as a listening device, as a promotional tool, and as an editor interested in finding out what people are talking about.

In response to a question about “pushing” message through Twitter, John explained that around 95% of the Twelpforce feed consists of @-replies because the focus there is responding to questions. Monique also mentioned that she has used Twitter for “push,” but that she prefers to provide followers with valuable information or answers and when she does pass along information it is usually in the form of a link that people are free to click on or not.

Ann raised hackles by saying that she didn’t like the word “push,” which Leigh explained that she used in order to be “irritating.” Instead, Ann prefers to think of the her Twitter activity as “sharing” or “recommending.” Who is she kidding, really?

John told a story of a consumer in Korea interacting with the Twelpforce stream (he was having trouble charging his cellphone or something like that) and used this experience to remind us that the online community is “location agnostic” and ideally gives you an opportunity to participate in the “hive mind.”

Ann told a story of complaining about Comcast on Twitter and then got such an overwhelming response on the Comcast Cares front that she started to think, “Comcast cares TOO MUCH!”

While talking about Hello Direct’s social media effort, Monique sagely opined, “If you don’t have a specific goal, how do you know if you achieved it.”

On the goal front, John too mentioned Jeremiah Owyang (who is that, anyway?), but then went on to talk about Best Buy’s high-level goal to provide customers with “Dream Support” but on a more immediate level to be relevant to people. “Be relevant” is how Best Buy hopes to answer the question, “Why would anyone want to be a fan of Best Buy on Facebook or follow them on Twitter?” To that end, he said that Best Buy is trying to empower employees to use Twitter across the organization because, frankly, things happening locally are going to be more relevant to folks than things happening at the national brand level.

When asked about Best Buy’s policies governing social media engagement on the part of employees, John said something very smart, methinks, which I shall liberally render here, “You have to trust your employees. Someone thought highly enough of that person to hire them. If they go online and say inappropriate or stupid things, that’s not a problem with the medium or the program, it’s a problem with hiring practices and HR. Frankly, the goal is to help people feel comfortable using these tools and if you become too draconian or micro-managing with your guidelines, you run the risk of scaring people off.”

In terms of encouraging employees to participate, Monique pointed out that she needs help doing this stuff so she needs to evangelize within her organization because, at the end of the day, she needs help. In other words, whatever policies you come up with need to have the result of getting more people involved, not discouraging them therefrom.

Of course, when people become active and even become a large part of your Twitter (or other online) presence, there is the risk that, when they leave, they may leave a “hole” in your presence that needs to be filled which means that you may need to think about succession planning both nationally and locally.

Again, if you begin micromanaging the feed and asking people to filter the personal out of the professional, then you will drive people away from the medium. At the end of the day, Twitter can help put a human face on a giant corporation and that human face requires personal details. As Monique says, “There IS a human factor here” and tells senior management, “Don’t be scared of this.” She also said (echoing Dave Thomas from yesterday), when setting up a program, bringing in the people (legal, MarCom, HR, etc.) who are most likely to kick and scream about your efforts and work with them to allay their fears.

Whatever policies you come up with, Heidi Ob’Bayi added, you need to treat as a living document that will be revisited on a regular basis and amended as needed. John said that’s exactly how Best Buy handles it while highlighting that you need to maintain a sense of “True North” (“We just want to be relevant”) as you help provide people with guidelines and hand-rails that will keep people on track.

I was trying to get a picture together for this post and so was only paying distracted attention to the conversation and only tuned back in when Ann said, “I listen to people who are bitching more than anyone else.” I think what she was saying is that when people are critical of you online or are complaining about your service you need to pay close attention because there are offering you an opportunity to learn about yourself and how you and your organization can get better (John echoed this sentiment with a humorous anecdote about responding to a critic who had suggested that Best Buy do something that was both vulgar and physically impossible.)