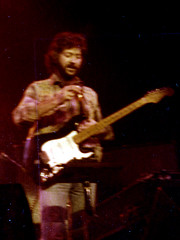 Listening to this Derek and the Dominoes boot is like eavesdropping on the dream of a drunkard.

I can imagine being at the show and perceiving it in the same befuddled way as it is presented in this recording: blurred, remote, and overwhelming. In other words, for all its distorted obscurity here we actually get the real thing itself, the event as it must have unfolded in the delirious ears of those present.

Akin to a lot of Dead audience tapes, the main thing you can hear is the guitar with everything else melting into a gray (or in the Dead’s case, “day-glo”) sludge. The lo-fidelity of the recording makes the performance densely abstract; you get the sense of the music’s general contours, its velocity, its trajectory, but your bewildered mind has to fill in the details.

Except, of course, for that guitar, the one identifiable, concrete element around which the otherwise chaotic noise organizes itself.

There are moments in Eric Clapton’s playing where I’ve said to myself, “That’s why people dig Clapton,” and some of those moments can be found in this ancient maelstrom’s aural whorl. These are the moments when the legend and hype of Clapton (his abstraction) take on solid form and exercise an uncanny, even mesmeric, force.

(Oddly enough, I don’t believe these are the same moments that Clapton appreciates in his own playing, but what of it? There’s no accounting for taste.)

I draw your attention to the following instances of Clapton’s concrete abstraction as worthy of further study: “Had to Cry Today” and “Sea of Joy” from Blind Faith; “Deserted Cities of the Heart” from Live Cream, Volume II;  “Roll It Over” and “Pearly Queen,” from Rainbow Concert; and, if you can find them, any Cream bootlegs from their 1967 tour (like this one from Detroit’s Grande Ballroom).

Clapton was hardly God, but at times He was close enough.