Apr 11, 2009 Comments Off on The Consolations of Conspiracy Theory

The Consolations of Conspiracy Theory 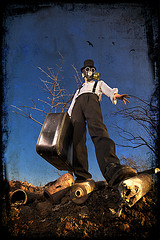 Ever since I realized that there was an “official story,” on the one hand, and a very complicated, to some degree unknowable, and to some degree intentionally obscured, reality on the other, I’ve been interested in conspiracy theories. From Holy Blood, Holy Grail to Loose Change, from occult Nazism to the reign of the reptoids, I’ve consistently been amused, amazed, and disturbed by the fantastic proliferation of alternative world histories and astonishing speculation about who’s really running things.

I’ve always tended to approach these theories with a Muldaurian “I want to believe” attitude, but have also always been disappointed when I dug down into the details. While it may be true that I’ve never met a conspiracy theory I didn’t like, it’s also true that I’ve never met a conspiracy theory that wasn’t riddled with holes, hallucinations, and brain-rending leaps of (il)logic. Reading this stuff has frequently been edifying and even, in a strange way, inspiring, but it has never been convincing.

Although the truth is undoubtedly out there, conspiracy theories are not about the truth. Their primary purpose is to forge a semblance of order from the relentless rush and incomprehensible sweep of events on both the human and cosmic scale. Scientific discovery has unveiled a universe of overwhelming temporal and spatial vastness, the mass media continually inundate us with an unassimilable torrent of devestating reports from the bottomless well of human suffering, and the traditional (i.e., religious or mythical) filters no longer have the power to channel our experience into comforting or even remotely manageable frames of reference.

Still, the thought that our lives are “meaningless commas in the sentence of time,” or that we are blindly stumbling, ‘neath a protective veil of self-deception, through a labyrinthine vortex of genetically driven ego-trips and Nietzschean/Orwellian power-games devoid of exit or purpose, is for most of us unbearable. So we clutch at the straws offered by the conspiracy theorists (not to mention the good old news) because they tell us that, even if it is the Greys or the Illuminati or the CIA or the World Bank or the Council on Foreign Relations or the Trilateral Commission, or whatever, at least SOMEONE is in charge and everything is at least going according to SOME plan, as nefarious, diabolical, or alien as that plan may be.

The question is: Why are we consoled by the thought of SOMETHING, even SOMETHING MALEVOLENT, behind EVERYTHING?

Why, on the contrary, is the notion that all we are and experience arises from and inevitably returns to a primordial, entropic chaos – in other words, to nothingness – so difficult, even impossible, to accept let alone embrace?