Investigations into the use of ActionScript 3.0 and dynamically generated representations of data sets led me to write this post on visual complexity, first published on December 1, 2006. 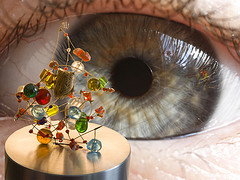 My research on Amaznode (see this post) reminded me that there are a lot of folks out there working on innovative and practical ways to display complex sets of data and networks of information.

While I thought I was so special for stumbling across Amaznode at Adobe Labs, I soon discovered that someone had actually referenced it back in September in a comment on this post from David Armano’s blog. In the aforementioned post, Armano praises the Visual Thesaurus, which depicts relationships between words in the same way Amaznode depicts relationships between products on Amazon (except the Visual Thesaurus actually allows for much deeper exploration of the related words it displays).

The Visual Thesaurus is just one example of information design that shows up on the site Visual Complexity, the stated intention of which is “to be a unified resource space for anyone interested in the visualization of complex networks.” This site is endlessly fascinating both due to the ingenious (and sometimes oddly beautiful) ways that people have devised to portray complex, densely interrelated systems, as well as due to the range of data, be it business-related (for example, what patterns might we discern by examining 10 million receipts from a large DIY store?) or just strange, that they have chosen to model.

As the serendipity of blogging and intellectual interest would have it, a colleague of mine brought The Baby Name Wizard’s Name Voyager to my attention yesterday. The NameVoyager shows the waxing and waning fortunes of baby names from the 1880s to the present. (It allows you to see, for example, that the name “Chester” peaked in popularity around 1910.) The creator of the NameVoyager is one Martin Wattenberg who has come up with a number of methods for graphing complex processes such as the editing history of Wikipedia pages, among other things. In fact, he has been so inventive that several samples of his work show up on the Visual Complexity website, which I didn’t even know existed two days ago!

Is 4-D the New 3-D? Thinking about Photosynth

One thing that irks me about the 3-D world is that it’s hard to find things in it. I’ve often been looking for my keys or a book or a CD and wished that I could just open up a search box, type in the object of my fruitless and frustrating search, and instantly locate the darn thing. The fact that 3-D spaces can be difficult to search visually is one thing that stands in the way of the the 3-D desktop metaphor, IMHO.

Then I remembered Photosynth, a software that allows you to make 3-D models of places from 2-D images which, thanks to the magic of tagging, come replete with a conveniently searchable 4th dimension (raising the question: Is information, and not time, the 4th dimension?).

I first wrote about Photosynth on Aquent’s Talent Blog in 2007. Here’s the original post:

Visual Information, Design, and the Future

A friend of mine passed this link along to me. It is a video of a software demo at the TED Conference back in March. The speaker is Blaise Aguera y Arcas who was demoing two software packages – Seadragon, which is used to browse large amounts of visual data, and Photosynth, which organizes pictures into navigable, 3-D spaces.

This stuff really has to be seen to be believed. It represents the future of how we will interact with visual data and also highlights that we are already creating virtual models of the world we live in by uploading content to websites like Flickr. There is also a cool example of an explorable, high resolution advertisement for Honda. Imagine if a picture in a magazine contained the richness of data you could find on an entire website. Mind-boggling.

Microsoft acquired Seadragon back in February. Aguera y Arcas makes a funny comment about that when people start clapping at the amazing things he’s showing them. Have you ever attended a software demo where people burst into spontaneous applause?