Apr 24, 2009 Comments Off on Product Placement in the Real World

Product Placement in the Real World

Another blast from the past, originally published on Aquent’s Talent Blog, December 11, 2006. Summary: Advertisers must consider “all the world’s a stage” and manufacture ubiquitous product placement. 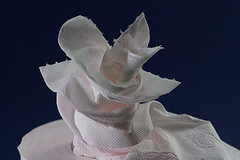 “As a result of the growing popularity of consumer-generated pictures, videos and e-mail messages on Internet sites like YouTube and Myspace, advertisers are getting consumers to essentially do their jobs for them,” according to this New York Times article which focuses on the emergence of Times Square as “a publishing platform.”

In brief, thanks to the ubiquity of digital cameras and the rise of user-generated and social networking sites, marketers are finding that “experiential marketing” (aka, “publicity stunts“), such as Charmin’s fancy public restrooms, are growing long legs on the Web. These restrooms alone, “[u]sed by thousands in Times Square [were] viewed by 7,400 Web users on one site alone.”

While this raises a lot of interesting questions about the meaning of “product placement” and whether or not advertisers should start courting, and compensating, particularly popular or prolific private citizens for featuring their products on Flickr and YouTube, I was particularly struck by the formulation “getting consumers to essentially do their jobs for them.” Now it is certainly the case that YouTubers and Flickr-ers are, wittingly or un-, doing things that benefit advertisers and the brands they promote. But so is anyone wearing a t-shirt with a visible logo.

It is not the job of advertisers to wander around the city in sandwich boards; it is their job, however, to come up with novel ways of getting brand-specific messages out to the world. If they create a spectacle noteworthy enough to generate spontaneous buzz promoted by random individuals, then they have done exactly what they are supposed to do. In fact, by now, I’d be astonished if the folks who conceived of and executed these events weren’t planning on a significant “web” effect. In a sense, if no one had posted this stuff to the Web, then you could rightly accuse advertisers of shirking.

Or do I, and not the paper of record, misunderstand what advertisers are supposed to do?