Philosophy simply puts everything before us, and neither explains nor deduces anything. – Ludwig Wittgenstein 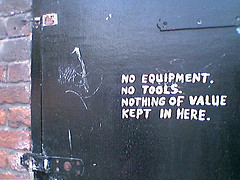 By making a distinction between the two, however, I do not mean to elevate the latter (philosophy) above the former (business). In fact, I was mildly chagrined that my arcane references to a long-dead philosopher and the equally deliquescent tradition of German Idealism with which he is associated bore so few immediately practical fruits. A few kindly souls actually took the time to read the post, so where was the pay off?

While I would like to say that “philosophy is it’s own pay off,” I actually believe that philosophy’s pay off is always and necessarily extra-philosophical. As the  the epigram to this post suggests, by “putting things before us” philosophy’s product amounts to “a perspective on things,” rather than any “thing” in particular. Wittgenstein put it this way: “One might also give the name ‘philosophy’ to what is possible before all new discoveries and inventions.”

Heidegger too insisted on the “no-thing-ness” of philosophical thought. To him, thinking was unique as an human activity because it did not truck with beings, but solely with Being (Sein), which he called “essentially the same as Nothingness” (wesenslgeich mit dem Nichts, or something like that).

But the case of Heidegger reminds us that philosophy’s product – a perspective on things – while not belonging properly to the order of things  can nevertheless have a tangible impact. A philosophical perspective not only shows what is there, but what is possible and, in some cases, what is necessary. When these things, possibilities, and necessities get organized into practices, philosophy has its pay off and that pay off could take the form of a religion, a political system, a life-style, or even a business.

Of course, in all these just-mentioned cases the work of organizing is what produces the real value, not the work’s philosophical underpinnings. The value of philosophy is always mediated. In the absence of this mediation, philosophy is as bereft as the coin of a vanished realm or lyric poetry in a dead and forgotten language.