Blogging for the Hell of It

Yesterday, in a class on “Blogging” that she was teaching as part of a course my company produced, Erika Napoletano said something to the effect that, “Nobody blogs just for the hell of it.”

My first response was: “Actually, I blog just for the hell of it.”

“This blog—an ill-organized assortment of essays, reviews, aphorisms and ephemera—serves no purpose,” I wanted to say.

But then, as I thought about it, I knew that this was mere posturing. My blog serves a very specific and, for me, crucial purpose as a space that I “own,” one where I can post and publish my views, my thoughts, and my philosophy.

In fact, I frequently motivate myself to add to this collection new thoughts, or at least newly formed revisions of old thoughts, by saying to myself, “If you really have something to say, something to teach the world, some wisdom to impart, comfort or guidance for the lost or wounded, aid and counsel to the youth, a truth that must be spoken and known, etc., you’d better put it somewhere where it might endure and, from time to time, be discovered.”

That somewhere is here.

For the Hell of it.

Jun 27, 2011 Comments Off on The Web and Total Surveillance

The Web and Total Surveillance

Years ago I became obsessed with Ezra Pound, the fascist poet, and so I was reading a magazine article about his stay in St. Elizabeth’s Hospital and there was a fuzzy photo of Pound in there and the caption read something like, “Paranoia: An Occupational Hazard of Sinologists.”

I was trained as a Germanist, so I speak from experience when hastening to add that a prolonged fixation on the Germans and their culture poses similar hazards.

That latter thought occurred to me as I considered the web not as a platform for free expression—even enabler of revolutions—but as a decentralized, massively intelligent surveillance device. A hybrid panopticon confessional.

We tend to think of the web as an amalgam of information. What if we saw it instead as an accumulation of evidence?

And speaking of the evolution of the human psyche and the impact of environmental factors thereupon, with every experience we are building a sense of what can possibly happen. So, what is the proper pace for world-building?

The internet exposes us to an insanely broad world of experiential possibility—indeed, it offers the greatest wealth of possibility individual human beings have ever encountered in the long lifetime of our species. These possibilities can, in their extremity, be shocking and disturbing to people, though not so much due to their graphic content, but rather because exposure to them accelerates, and in a painfully unidimensional manner, the intra-psychological process of world-building, producing, ultimately, a painful, homeostatic disruption.

Never fear. We still have lives, the vast bulk of which will never leave a trace in this world wide web. Or, rather, only leave traces, nothing more. What is captured by the web is often only circumstantial evidence, after all, merely the trace.

Our actual lived experience, phenomenologically speaking, never crosses the threshold except as description, depiction or expression. In other words, never as the thing itself.

And, in this way, Kant’s uncrackable kernel (the echo of Leibniz’s) becomes our last, inscrutable refuge. 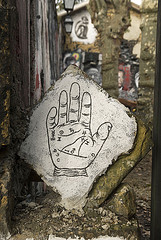 To take one example (albeit from 2001!), consider, “The Sickness,” recorded by the RZA (as “Bobby Digital”), with its impassioned (Nation of Gods and Earths) fundamentalist ethos (“Bless the seeds who praise the Most High without asking why”) and archaically militant refrain: “So praise the Lord/ and raise your sword/ against this wicked society/Society.” END_OF_DOCUMENT_TOKEN_TO_BE_REPLACED