God, Theory of Mind, and the Search for Meaning 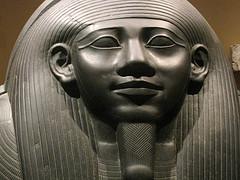 In the Boston Globe‘s “Ideas” section yesterday, they reprinted a post from Josh Rothman which had originally appeared on the Globes’s “Brainiac” blog entitled, “Is God a Social Illusion?”

The jumping-off point for Rothman’s post was Jesse Bering’s assertion that belief in God was an almost inevitable result of our in-born tendency to create a theory of mind which allows us to divine the intentions of others and thus facilitates socialization on many levels. Because we are always looking for intention in others, Bering reasons, it makes sense that we also look for intentions in the otherwise apparently random events in our lives or the universe more broadly.

Bering’s argument reminded me of Nietzsche’s notion that our belief in God stemmed from our reliance on the grammatical convention that every sentence has a subject; we can’t look at the world without thinking, “Who did this?” Thus, at least as a kind of provocation, I appreciated Bering’s sentiment. Rothman, for his part, did not, quipping, “Color me unconvinced.”

Rothman contends that, if we are to find any instinctual basis for the belief in God, than we must look for the “meaning instinct.” As he puts it, “It’s the search for meaning, not the search for other minds, that makes religions part of the fabric of human life.”

Aside from the fact that herewith Rothman seems to miss the point of the theory of mind—we are not looking for other minds as humans, but rather for the meaning of human actions based on the intentions and perspective we assume to lurk behind these actions—I think he (and Bering with him) also misses the connection between religion and God, on the one hand, and religion and humans on the other.

First of all, not every religion has a single God at its center (indeed, the notion of monotheism came along kind of late in the game, human evolution-wise), and, in fact, there are venerable religions like Buddhism in which God plays no real role whatsoever. Second of all, specific religious creeds notwithstanding, religion, in the end, isn’t about belief in God; it’s about a shared set of practices and rituals—and in some cases an elaborate social hierarchy built around a priest-class—that binds a social group together.

Wrestling with belief in God is a fairly modern pursuit dependent as it is on things like literacy, leisure time, and an awareness of other cultures. In the early days of humanity, you were born into a world that was already defined for you first in terms of obligatory behaviors and then in terms of a shared perspective on the world grounded in a shared language. Your “religion” wasn’t a defined set of beliefs so much as “the way things are.”

If you want to understand religion from an evolutionary standpoint, you need to start with its social-organizing aspect and leave things like individual belief in a deity for a later date because, I believe, religion begins with religious practice, not religious conviction.