Below is the text of a proposal I submitted to a conference entitled “Critical Speculations: Future Worlds, Perilous Histories, and Walter Benjamin Unbound” which will be held at SUNY Albany September 28-29, 2012

At the very end of his much-cited—and frequently misunderstood—essay on the work of art in the age of mechanical reproduction, Walter Benajmin wrote, “Humanity, which once upon a time in Homer served as an object of fascination for the gods, has now become one for itself.”

As with much of that essay, this sentence is more true now than when it was written. While one need look no further than the ubiquity of reality television to appreciate this, it is actually in social media, and especially on Twitter, that this process achieves its mass apotheosis. Indeed, Twitter is the contemporary, virtual manifestation of the Parisian Arcades that Benjamin spent the last years of his life studying.

For Benjamin, the Arcades served as an allegorical crystallization of the far-reaching and irreversible changes wrought by the accelerated rise of modernity. The same must be said of Twitter with regard to the post-modern, post-industrial, hyper-mediated present. Indeed, like a living, electronic reef, Twitter is composed of the accreted micro-sentiments of mankind. As such, it provides a protean, hyperdimensional portrait of contemporary subjectivity in all its most trivial, absurd and sublime glory.

END_OF_DOCUMENT_TOKEN_TO_BE_REPLACED

Three Things I Learned Watching Joe Lovano’s Us Five at Scullers on 9.13.12 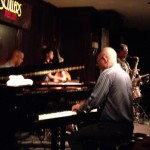 Us Five, a jazz ensemble led by reedman Joe Lovano and featuring James Weidman on piano, Esperanza Spalding on bass, and drummers Otis Brown III and Francisco Mela, opened their two night stand at Scullers last night. I saw the group almost exactly two years ago (sans Spalding—Peter Slavov handled bass duties) and, at that time, thought that they were the best jazz band I had ever seen. That may have been an exercise in hyperbole but they are a ridiculously talented group of people, and if anything, were even better this time around. The level of creativity and invention they brought to the stage was of such a high caliber, the music they made of such exquisite quality and played with such raucous refinement, I was literally moved me to tears.

There were three things I learned last night watching this group in action:

1. One Must Appreciate and Acknowledge Mastery

Two years back, I got real hung up by what I heard as excessive Trane-isms in Lovano’s playing. That was my problem, not his. Joe Lovano is a master who can play whatever he wants and everything he plays is dead-on—rhythmically engaging, intricate, elaborate, beautiful. And everyone in this band is as much the master. Last night, I focused on appreciating this fact and allowing myself to be amazed by these human beings and their stunning ability not only to spontaneously create remarkable music, but to do so collectively, “like they were one being,” as my friend Mike said after the show. I am insecure and am prone to neurotically transform encounters with incredible people into bouts of self-loathing. In this instance, however, I was simply glad  to be in the presene of these inspiring and illuminating masters.

The set I saw was, as I said, the first of a two night stand. Yet the band played with such intensity, joy and abandon that you would have thought it was the last time they would ever play together on this Earth. This aspect of their performance, this striving after the ultimate, made me realize that what made the evening special wasn’t simply how gifted they were as musicians or how impressive their technical virtuosity, particularly when exercised with such a relaxed, even casual air, but that they threw themselves into it so utterly. They didn’t have to do that. They didn’t have to play as if they were aiming to produce the best music possible, the most finely-wrought solos, the most ingenious accompaniment, but they did. To have ability is a good thing. To have the will to make the most of that ability and then to actually put in the effort (though it appear effortless) to do your utmost—for what? the audience? the art? the sheer joy of masterful performance?—that is the better thing. Go all out. Every time.

She really is! I had heard of her, of course, (wasn’t she on the Oscars or something?) and seen some video on YouTube but I had no idea what a badass she really was. Laughing, smiling, swaying, lost in the music, she melded deftly with the chaotic, surging rhythmscape conjured by Brown and Mela and played several bravura solos of jaw-dropping artfulness. My only thought was, “I hope that this young woman, who could do whatever she wants musically, doesn’t get sick of doing this, because she’s awesome at it!” As good as the rest of the band is, and as great and irrepressible as Lovano himself is, Spalding was the unequivocal star. She’s astonishing.