The phoenix also says, along with Heraclitus, “All is flux.” Everything is tipping over into chaos and emerging out of it. This idea is reinforced by the second tattoo I want, on the back of my neck, of a serpent (or dragon) eating it’s own tail like this one: END_OF_DOCUMENT_TOKEN_TO_BE_REPLACED 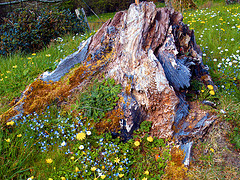