How High Was My Fire? (or Why High on Fire Matters) 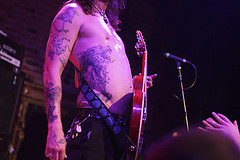 Easily the best band on earth. I sincerely hope other bands pay attention and decide to eschew all the pretension and all the trends and just focus on creating real, honest-to-God ART. That’s a rare thing these days. – urdisturbing

I went to the Metal/Hardcore festival at the Palladium in Worcester in 1999 mainly to see Morbid Angel, a band I’d been into since 1991.

Back then, after reading about Morbid Angel in Spin, I picked up an Earache compilation called Grindcrusher at Disc Diggers (long since defunct) in Somerville (I also picked up Morbid Angel’s masterful Altars of Madness there shortly thereafter) and was introduced to their sound via “Chapel of Ghouls,” a Slayer-esque monolith of strangely psychedelic, thrashy death metal.

Of course, the rest of the cassette kicked ass as well because Earache’s roster in the early 90s was a who’s who of genre-defining death and grind bands (Carcass, Entombed, Bolt Thrower, Napalm Death, Terrorizer, etc.). Given my association, then, of the label with a certain level of aesthetic quality, I was happy to come across a basket of discounted Earache cassettes sitting on a table in the hustle and bustle of the “labels” area set up at the Palladium that night.

After a bit of rummaging around I ended up buying some Napalm Death —From Enslavement to Obliteration and Harmony Corruption, if memory serves— and a tape that, like anything that matters, altered the course of my life: Sleep’s Holy Mountain.

I’ll be honest. I bought the thing because is was like two bucks and the cover boasted an intricately ornate graffiti tableau consisting mainly of variations on “pot leaf.” Listening to it while driving through the dark and wooded hills outside of US 495, my mind just blew and blew. These Sabbath worshipers, thanks to their ability to craft a riff and wail trippily, took unabashed adulation to the point of mad originality. The first galloping notes of “Dragonaut” —the sinewy ooze of the bass line, the oddly chanted vocal (“Ride the dragon under Mars’ red sky”)— hooked me immediately. I couldn’t believe how great it sounded. END_OF_DOCUMENT_TOKEN_TO_BE_REPLACED