It always puzzles me when people dismiss homosexuality, or frankly, any particular human behavior, as “unnatural.”

It puzzles me because people who hold this view are not thereby saying that homosexuality is physically impossible. Indeed, its physical possibility is a necessary pre-condition of its being either denounced or proscribed. But this then begs the question:

How can something that is physically possible be “unnatural”?

In other words, if a particular behavior can be observed in the natural world, we must admit of its “naturalness.” Since sexual interactions occur between members of the same sex in at least one species (ours), and possibly others, homosexuality is, ipso facto, natural.

So what is really going on when humans claim that a particular human behavior goes “against nature”?

END_OF_DOCUMENT_TOKEN_TO_BE_REPLACED

Somebody told me, “You could have it made/But you talk too much.” – from “Secret Face”

If I’m going to blog everyday, I’m going to have to keep this stuff mercifully brief. Which will mean going against my nature.

Does that mean I’m being “inauthentic” and thus running counter to the very essence of blogging?

Anything is possible, however improbable.

Dec 24, 2009 Comments Off on Man against Nature, Nature against God

Man against Nature, Nature against God 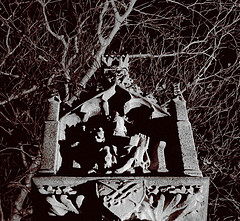 Conservative critic Ross Douthat recently took James Cameron and Hollywood to task for rampant pantheist sympathies writing that pantheism “represents a form of religion that even atheists can support.”

While I believe he is mistaken to equate, as he does, pantheism with “nature worship” – the latter being more akin to polytheism or animism and the former meaning literally that God is too be found in the totality of the All, not “just” nature – I do agree that those who seek solace in natural wonders tend to be fairly selective about those parts of the natural world that they find wonderful, failing, for example, to hear the voice of God in cancer’s fatal malignancy or see the face of God in the blue sky’s indifference to atrocities unfolding ‘neath its broad, azure beams.

Though I sense Douthat’s tacit support of the Christian side of the equation, I appreciate that, in his argument against pantheism, he actually grants atheism a kind of tragic nobility:

Religion exists, in part, precisely because humans aren’t at home amid these cruel rhythms. We stand half inside the natural world and half outside it. We’re beasts with self-consciousness, predators with ethics, mortal creatures who yearn for immortality.

This is an agonized position, and if there’s no escape upward — or no God to take on flesh and come among us, as the Christmas story has it — a deeply tragic one.

Personally, what fills me with awe is the age-old human struggle to wrest sense from the senseless and to fashion purpose in the raging forge of entropic impermanence. That these efforts have about them the air of inescapable doom does indeed make them tragic.

That they can also result in moments, even epochs, of beauty, wisdom, freedom, and love, is truly divine.