I am listening to Flowers by the Rolling Stones on MOG.

I have never owned this album and, although I have yet to hear a song I haven’t heard before (I’m on “Let’s Spend the Night Together“), I feel like I’m hearing it for the first time. It’s pretty amazing.

The first thing that hits you is the bass. It’s way up front and in the stereo mix a galloping, insistent presence.

More interesting to me than the music—”Lady Jane” is a weird anticipation of the Grateful Dead (“Rosemary,” “Mountains of the Moon” on AOXOMOXOA) and Depeche Mode (“One Caress” on Songs of Faith and Devotion))—is the fact that I’m listening to music on MOG.

I’m sure others have written this elsewhere (if there were only a way of searching the Web to find out if anyone else has posted anything about MOG), but there is a “dream come true” quality to MOG that I can’t get over: almost any music I think of, I can listen to at will.

After a lifetime of listening to music as chosen by others, in the case of radio, or to the extent that I could access its recorded form (I include mp3 or other rips of albums to be essentially the same thing in a different recording medium or, more accurately, encoding), I am now plugged in to a vast, explorable library of music.

I must say it means that I haven’t used iTunes in going on two weeks.

And that my burgeoned cd collection seems even more archaic than ever.

As long as we have electricity and connectivity and a robust information infrastructure—and are not being attacked by government forces or rebel militia—this is how recorded music (and all recorded media?) will be consumed henceforth. 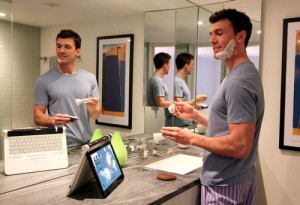