Why We Do the Things We Do 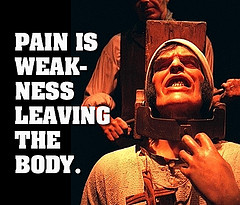 I would say that my greatest weakness is a certain vindictive ruthlessness. I happen to be VERY competitive and when I compete, I don’t want to just win, I want to crush my opponent. Utterly. Totally. I don’t want to face them again in the future when they have gotten stronger, wiser, better. I want them broken. Forever.

Were I to name my second greatest weakness, it would be, ironically, a tendency to indulge in arbitrary acts of magnanimity and selfless mercy. For example, there are times when I stop short of annihilating my rivals and, instead, leave them with a sense of hope, even encouragement. That is, although my dominance and superiority will be painfully obvious to them, by praising their abilities and hinting at anxiety concerning an inevitable, future clash, from which I openly suggest I do not foresee myself emerging victorious, I practically invite them to return and challenge me again once their wounds have healed and their strength has been renewed.

Of course, when they do return, I obliterate them. Which I guess makes my second weakness just an extension of my first, when you really look at it.

So, what’s your greatest weakness?