The Big Takeaways Sesh at the MProfs B2B

Bob Knorpp of the Cool Beans Group kicked things off with “pay attention to the keywords you are using in social status updates.” If you are looking for additional SEO power and buzz, focusing on these status updates can have an impact based on the way these things are indexed (with an emphasis on the first six words).

Dave Thomas of SAS focused on the power of content and especially the importance of re-purposing the content you produce. He referred to Kirsten Watson’s (Kinaxis) practice of producing a white paper, first, then using that to produce blog posts, then creating a deck from that for Slideshare, and finally, interviewing the author to create a podcast. An audience member then told people not to forget about images which are, of course, indexed as well.

Stephanie Miller of Return Path recalled the advice that you should never test just to test, but always to use testing to prove out particular points.

Bob Knorpp shared the lesson that you should listen to your sales force to find out what kinds of content bring the best leads, then optimize for that content. It might sound obvious, he said, but it bears repeating because it gives you something very concrete to work with. (I found “improving the relationship between sales and marketing” one of the sub-themes of the entire forum.)

Stephanie Miller, finally, recalled an exercise used in one session where the speaker took the marketing messages of several competitors and showed that you could not tell the companies apart solely based on these messages, which were essentially the same. Compare your messaging to that of your competitors and prepare to have your eyes opened!

As part of a discussion about getting more people in your organization involved in social media, Bob Knorpp cautioned first that it may not be the case that everyone is actually going to be good at it (blogging, for example). So you should take people’s strengths into considerations before asking them to do something. He wanted people to remember that, frankly, if your organization is listening, then that is already a win.

There followed a discussion about the loss of control brought about my social media. It was acknowledged that this loss of control can certainly make some people nervous, and that this is a natural response in some cases, but that our role needs to be one of educating people on how to use these tools. In fact, we can create whole plans around it so that we have a framework within which to judge and evaluate our efforts.

The conversation then returned to the publishing metaphor especially in the context of Kipp Bodnar’s suggestion that your goal should be to produce the best-read magazine in your industry. Bob Knorpp took issue with the publishing metaphor and suggested that we use, instead, the “theme park” metaphor. “When people go to Disneyland, they don’t rave about the brochure, they rave about the experience,” as he put it.

Finally, I said that my big takeaway was that all this isn’t about the technology; it’s about the “soft stuff.” Marketing automation, lead management, social media engagement all boil down to human interactions. It’s these interactions that produce the processes that you automate, build trust between marketing and sales, and, ultimately, determine the role you play in the lives of your customers. 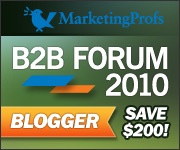 Like I said in a prior post, when I attended MarketingProfs B2B Forum several years ago, it changed my life (for the better!). Now I would like to add that 80% of the work I’m currently doing can be linked back to contacts I made at the Forum last year when I moderated a panel on content marketing.

Of course, your results may vary but I highly encourage you to attend this event (or the associated Tweetup) if you are in Boston next week. I say that on the one hand because they’ve given me a pass for promoting the event, but, on the other hand, I would say it even if they hadn’t. The MarketingProfs community is full of interesting, talented people and you will benefit from just being around them.

Oh yeah, and while there, you could even have the chance to talk with me, one-on-one, mano-a-mano, about blogging. Believe me, I’ve got a thing or two to tell you on that topic.

It’s still not too late to register and, I think, you can still get a $200 discount if you use the codeword “BLOG.”

I very much hope to see you there and, if you see me, come over and say “Hi.” I’m really tall!

Two years ago I attended the MarketingProfs B2B Forum in Boston and, frankly, it changed my life.

Aside from finally getting to meet the fabulous Ann Handley in person, I found myself connected to a community of smart, interesting, and engaged marketers that constitute the core of my professional network to this very day.

Well, guess what? MarketingProfs is hosting another B2B Forum May 3-5 at Boston’s Seaport Hotel. The emphasis on practical, actionable learning is one of the things that I’ve always valued about MarketingProfs events and, once again, they’ve assembled an impressive roster of speakers who will bring a ton of real-world experience and, more importantly, useful advice to the sessions they lead. I’ve met a number of these folks – Amy Black, Rachel Happe, Christina Kerley, David Thomas, Laura Ramos – and must say that they are smart, thoughtful marketers that, frankly, you can’t afford not to meet.

But wait, there’s more! MarketingProfs also does a great job lining up keynote speakers and this year is no exception. First, there’s David Weinberger, co-author of the runaway business hit, The Cluetrain Manifesto, who will be talking about what marketers are still missing about the digital economy. Secondly, attendees will also get a chance to hear Mitch Joel, who I saw at PodCamp several years ago and who remains one of the most humorous and thought-provoking speakers I’ve seen.

And if that’s not enough, I will be there in the role of Blog Therapist. Seriously.

It’s not to late to register and if you use the codeword “BLOG” then you’ll get yourself a $200 discount.

At the beginning of this video, captured by the ever ebullient Mr. Sonny Gill at the MarketingProfs Digital Marketing Mixer back in October, I explain what I do as a “thought ronin” (and talk about what I was digging at the Mixer):

Apropos of MarketingProfs, I’m currently editing the official pre-game blog for their SocialTech 2010 conference to be held in San Jose on March 25.

This conference will focus on how B2B marketers in the hi-tech space (think: IBM, Intel, Cisco, SAP, etc.) are actually using social media to achieve a wide range of business goals. If that’s your bag, you should check it out (it’ll cost you around $500 but there is also a less expensive “virtual attendance option“).

Oct 20, 2009 Comments Off on MarketingProfs Digital Mixer, Here I Come!

I’m off to MarketingProfs’ Digital Mixer in Chicago this morning and I’m practically giddy.

Look, I’m a people person and if there is one thing that conferences like this have, it’s people. The bonus is that in this case, I’ve actually met some of them before and am very much looking forward to reconnecting with Paul Chaney, Amber Naslund, Beth Harte, Jason Baer, Mack Collier, as well as all the great folks from MarketingProfs proper.

The super-bonus is that there’s gonna be folks there whom I haven’t yet met but, having met them, will find my life utterly transformed and the world full of bright, ever-expanding horizons. Or at least I’ll get their business card.

I must admit, however, that, aside from meeting people, “deepening relationships,” and “participating in the conversation,” I have another goal in attending the MarketingProfs Digital Mixer: atonement.

You see, at a MarketingProfs event last June, I moderated a panel on content strategy. At the beginning of the session, I asked people to put away their laptops and refrain from Tweeting unless prior to doing so they could honestly and earnestly say to themselves, “The world must know!” It was not surprising that, for doing so, I was called, by Greg Verdino among other people, a “douche.”

I don’t know if the mustache I’m growing will really help me live down my reputation as “douchey,” but, heck, I’m gonna do my darnedest to make up for this egregious social media faux pas and show everybody that I’ve drunk the Kool Aid, that I’ve gotten with the program, and that I can play well with others.

And much like my conscious decision to grow a mustache, in spite of its many perils, that last sentence was written in the complete absence of any inner sense of irony or sarcasm. See ya there! 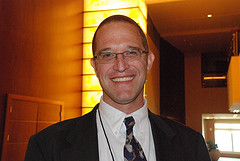 I spent Monday and Tuesday at MarketingProfs B2B Forum where I moderated a panel on “creating robust content to engage customers and prospects.” The panelists – Phil Juliano of Novell, Valeria Maltoni (the Conversation Agent), Chris Penn of the Student Loan Network, and Mike O’Toole of PJA – were all smart, funny, articulate and great to work with. It was a privilege to be associated with these folks.

While I hope that our panel discussion, which Valeria recapped on her blog and which Mike and I previewed on MarketingProfs DailyFix, provided attendees with a useful framework and practical advice for advancing their content-based marketing initiatives, I know for a fact that I learned a lot from the sessions I visited and the numerous people I met at this conference. To whit:

I have more to say on each of these topics but am actually more curious to hear what you have to say about them. This stuff sound right? Wrong? Whatever?