The Long and Short of the Digital Marketing Mixer 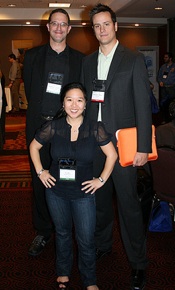 Note: I’m cross-posting this on the MarketingProfs Daily Fix blog, but they have an elaborate and painful approval process so I wanted to get it up here in the interest of time. – Matt.

It’s a week ago today that I departed Boston for Chicago in order to attend, and blog upon, Marketingprofs’ Digital Mixer.

While I live-blogged a number of sessions – on creating effective webinar programs; on developing corporate social media policies; on using Facebook for brand recognition; on deepening customer relationships with Twitter; on SEO plus Social Media; and on the exceedingly clear thoughts of Dr. BJ Fogg – I wanted to take this opportunity to highlight some of the grander themes or gaudier threads that I noticed running through the event.

Again and again I heard people talking about “personalizing” or “humanizing” social media efforts, which makes sense to me since I’ve always viewed blogs and such as “personal genres.” This humanization needs to take place both at the organizational level, by creating social media policies which encourage participation on the part of employees and other stakeholders, as well as on the tactical level. There needs to be a living person behind your blog or Twitter stream or what-have-you who will take the time to listen and respond to folks looking to interact with your brand or organization.

Of course, if you are asking people to put themselves into social media efforts, there is always the possibility that they will develop relationships with customers or recognition within a community that begins to outshine the connection to the brand. While many people raised questions concerning the proper mix of personal and professional in brand-related social media activities, the bigger fear seemed to be about retention. Specifically, they asked, “What happens when someone becomes so associated with the brand via social media that their departure leaves a gaping hole in your company’s online presence?”

3. Social Media is Growing Up

There was a palpable dearth of 101-type sessions on social media and its application to business. Instead, we were treated to a lot of pithy studies describing what real companies – Best Buy, Intel, Hansen’s Natural Soda, Pitney Bowes, SAS, etc. – have really done with Facebook, Twitter, LinkedIn, Slideshare, blogs, podcasts, etc. Yes, Dell, Comcast, and Zappos all got mentioned, but it was clear that emerging social media technologies have not only entered the cultural mainstream but have become a permanent and rapidly maturing part of the commercial landscape.

I got into a rather lively conversation by asserting in a loud, boorish tone that “SEO is a scam,” a conversation in which I was duly schooled but which also clarified my understanding of how optimization happens. In fairness to me, there were plenty of folks who were warning attendees against “SEO snake oil,” but they contrasted such efforts with the legit, white-hat things that people can, should, and must do to optimize their content for, as Liana E. Evans sagely pointed out, “Optimized content is king.”

That being said, I discovered that there are certain link-building activities – directory submissions, Digg-ing, even blogging – that approach data entry in terms of complexity (ie., “not very) and labor intensivity (i.e, “very”). Hiring an intern or “some guys in India” to do this for you isn’t scammy, at the end of the day, but it’s not brain surgery either and reminded me that search engine rank not only reflects quality of content but also quantity of effort.

Finally. while discussing the assassination of President Lincoln with Apogee’s Bill Leake, I considered for the first time the effect that the 17th Amendment had on states’ rights. This amendment “… restates the first paragraph of Article I, section 3 of the Constitution and provides for the election of senators by replacing the phrase ‘chosen by the Legislature thereof’ with ‘elected by the people thereof.'” (read more). The result of this shift, which made senators beholden to their constituents rather than state governments, was the further consolidation of federal power at the expense of the states insofar as senators no longer needed to concern themselves with pleasing their respective state legislatures and could focus on perpetuating their own careers through the maintenance of voting blocks representing diverse local and private interests.

I never really thought about that before. But then again, I’m a damn Yankee.