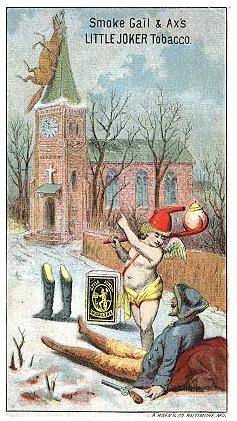 I may be late to the party, but I always have a good time.

See, I final caught Heath Ledger’s swan song in The Dark Knight and, like many people, his performance as the Joker really got under my skin.

Unlike those shadowy figures who are thus labeled, this Joker is a terrorist in the most literal sense of the word: his sole aim is the production of a blithely dehumanizing, sanity annihilating, shockingly atavistic terror, specifically, the terror evoked by abject encounters with the chaotic void from which all reality issues and to which it inexorably returns.

The film gets evil precisely right when the Joker says, “The only sensible way to live in this world is without rules.” From the standpoint of law and order, in either a secular or non-secular sense, the idea that there is no absolute line dividing right from wrong or good from evil is intolerable. To celebrate those acts condemned by the dominant system leaves its hierarchy of values in place; to reject the legitimacy of any hierarchy at all is satanic rebellion.

(On a side note, I hear in the Joker’s ethos the pragmatic view that an unconditional flexibility – no fixed, dogmatic rules  – provides the key to adaptive survival. Of course, the amorality of adaptation, which is really just an opportunistic and even accidental “going with the flow,” is what truly frightens opponents of evolutionary theory.)

The film gets chaos precisely wrong. The violence and mayhem orchestrated by the Joker undeniably reflects the pervading notion of chaos as unpredictable, unassimilable, and overwhelming activity, but therein lies its error. True disorder is not characterized by a lot of something happening, but rather by a lot of nothing happening.

Indeed, the most accurate image of chaos we can muster is the heat death which awaits us as the entropic end of it all. When there is no longer any difference in energy states anywhere in the universe the pure state of chaos has been attained and it is, by definition, indistinguishable from nothingness. (Of course, this is why reviewers were unanimous in designating the Joker’s worldview “nihilistic.”)

By taking the side of the entropic decay and unstoppable disintegration of order, the Joker aligns himself with the grinding momentum of reality itself. It’s also why he is, as he says, “ahead of the curve,” and always one step ahead of Batman and the police; reality’s motion, its long march towards total dissolution is always one step ahead of us. We can never overtake it and are always, in the end and even before, overtaken.

Yet, it is this fact, the ultimate source of the Joker’s power, which also makes Batman’s adherence to his “one rule” truly heroic, though in the tragic sense. Belief in the timeless and unquestionable validity of “the rule” requires the denial of reality (that all rules are provisional, conventional, mutable ) and is, insofar, utter folly. Nevertheless, the faith expressed in devotion to “the rule” constitutes the stuff of valor and is, therewith, utterly human.

This raises the very question posed insistently and insidiously by the Joker as envisioned by Heath Ledger:

Does the unblinking acceptance of reality call for the overcoming of our humanity?

And if it does, should we?