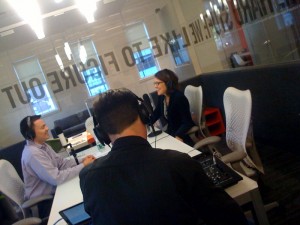 I once attracted unmitigated ire by openly trumpeting my credentials as a SMexpert.

On account of the ego-bruising I suffered at that time, I very eagerly tuned in yesterday to PJA‘s weekly internet radio show, This Week in Social Media. Not only was the scheduled guest my good friend, Ann Handley, Chief Content Officer at MarketingProfs, but the topic was, for me, peculiarly hot:

“What is a Social Media Expert?”

The choice of topic was driven in part by a much-shared article in BusinessWeek, “Beware Social Media Snake Oil,” which derided social media’s “self-proclaimed experts” and “wannabes” for asking companies to invest in their services and the super-hyped emerging media without being able to promise results or even prove that they have achieved anything in the past. (Note: I was pleased to see that the “snake oil” in the title was taken from a quote by the appallingly handsome, David Armano. – MTG)

In fairness, the actual gist of the article was, “Social media are powerful tools so don’t let the charlatans turn you off completely,” and this idea was at the center of the conversation between Ann, Mike O’Toole, President of PJA, and show host, Doug Zanger (which can be heard in its entirety here).

Reflecting the shared opinion that the social media expert was not an entirely mythical figure, Mike and Ann sketched out what a true SMexpert might look like.

“We’re leaving the ‘belief’ era, marked by the ubiquity of social media ‘Gurus’ and ‘Evangelists’,” as Mike put it, “and entering the era of ‘get stuff done.'” To whit, while still willing to spend money on social media programs, marketers are, in Mike’s words, “asking harder questions” about forecasts and results.

BusinessWeek took the self-proclaimed to task for offering either meaningless stats (pageviews, followers, friends, etc.) or the novelty argument (“this stuff is new so it’s a big gamble; you got to think like a VC and expect most things to fail…”).

While believing that, “It’s never going to be the case that you can say X spend on Social Media will turn into Y revenues,” Mike insists that, “We can offer better than the VC analogy used by the Saatchi dude in the snake oil article.” (Note: That last sentence does not reflect Mike’s exact words but my own rendition of what I thought I heard. -MTG)

For her part, Ann stressed that in addition to evidence of significant time spent participating in social media, were she looking for a consultant, she would “look for someone with a broader perspective who understands how social media fits in not only with marketing, but with the larger organization more broadly.”

“Social is an ingredient,” Ann stated piquantly, “It’s not going to be the whole batter.”

However, I agree even more vigorously with Ann that true expertise will reflect a deep and demonstrable understanding of how the enterprise could benefit from this or that social media platform, application, or functional behavior, and not solely familiarity, however developed, with a particular social media instance like Facebook or Twitter.

In fact, it is for this latter reason that I recommend skepticism towards any claim to social media expertise, credentialed or otherwise.

Aside from the fact that the “social media” have yet to be definitely defined (though Jeremiah Owyang has offered an interesting working definition, if you substitute “media” for “network”), any organization should be more concerned that someone can expertly leverage the potential of a tool or methodology to solve its specific business problems than that they are, so to speak, steeped in the tool itself.