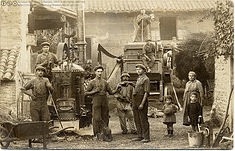 In the olden days, the watchword was: “Content is King!” Thinking on this now, however, I’m not sure that that it was ever really true.

Certainly, if your site featured lots and lots of stuff that lots and lots of people wanted to read, look at, and/or share, if it was “explorable,” in other words, then it may have, at least for a time, stood shoulder to shoulder with its peers in the interwebs’ pantheon of much-favored destinations.

Still, though like any great house it may have owed its rank and status to the tireless service of its retainers, the site itself was the true lord and master; the content, on the other hand served as knight and page, courtier and courtesan attracting visitors to the gilded halls, making their stay enjoyable, and vanishing like the April snow when the favor of these visitors or the sovereign turned from them.

Which is not to say, of course, that content is unnecessary. On the contrary, the content on your site – and I’m thinking both of information generally (address, phone number, product descriptions, client lists, etc.) as well as articles, stories, reports, white papers, opinion pieces, user reviews, videos, podcasts, and consumable images (i.e., NOT stock photos evanescently embodying your brand’s look and feel), and so on – is your site for all intents and purposes.

The content does all the work, yes, and yet “something else” reaps the benefits and is imminently more important. To understand this dynamic, we must turn to the teachings of Georg Wilhelm Friedrich Hegel and specifically that part in his masterwork, The Phenomenology of Mind, which he devotes to the dialectic of “Lordship and Servitude,” or, in the original German, “Herrschaft und Knechtschaft.” (Sometimes, this is referred to as the “master-slave dialectic.”)

Hegel points out that what the lord loses by abstracting himself from actual, laborious interaction with the physical world – namely, a fundamental grounding in reality – he gains again both in the unselfconscious consumption of this alienated labor and in the satisfaction of determining what will and will not happen by his decree.

Seen from the other side, by his efforts the servant develops the strength and competence on which the lord is absolutely dependent – powers that will in turn serve the servant well in the moment of revolt – but only by allowing his work to be designed and directed by a force external to himself.

It is the privilege of the lord to establish the purpose and goal of all the work performed in his domain and it is in the exercise of this privilege that he becomes kingly. However, this purpose has no material reality in itself; it only acquires and maintains materiality through the substantive work of the servant.

For this reason, when it comes to content marketing I say that “Purpose, not Content, is King,” bearing in mind however that purpose only assumes living form through the content most proper to its eventual realization.

Accordingly, content, in and of itself, has no meaning, no purpose, no authority. You can’t say, for example, whether this or that piece of content, taken in isolation, has any value at all. It doesn’t.

No, the only thing that imbues content with any meaning or equips it with any value is the purpose for which it is deployed. Which is why strategy, conceptual and therefore immaterial in nature, is actually the hardest part of content marketing.