Pat Martino and Tony Monaco at Scullers, May 2010 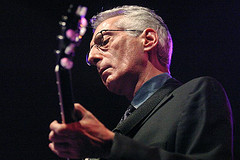 Caught Pat Martino’s first set at Scullers last night. He was playing with organist Tony Monaco and drummer Jason Brown and confirmed note-by-sinewy-note  his well-deserved status as a living master still very much in possession of his prodigious gifts.

Martino’s patented “horn-like” lines were in full display, as was his aptly groovy and well nigh gut-bucket comping, while his dynamic phrasing added a sublimely meta-rhythmic layer to all the serpentine spideriness of his “concept.”

One thing that separates Martino from the be-boppers and modernists who preceded him (the Jimmy Raneys and Jim Halls of the world) and the post-modern post-fusionists of today (from Scofield to Rosenwinkel) is that he’s got a healthy dose of the Sixties on him. This shines through in his come-by-it-honestly nativist approach to the funky organ trio setting as well as in his trance-inducing, raga-esque vorticism (which reminded me, at times, of my longtime idol, Gabor Szabo).

In other words, Martino was great.

Nevertheless, for me, the true star of the evening was Tony Monaco. A highly animated and expressive guy (his protean facial expressions were themselves worth the price of admission), he played astoundingly well, moving fluidly from vintage Jimmy Smithery to an ELP-like psychedelia. The neck-deep in the reverb, quasi-soap-opera tone he chose during “Alone Together,” which he rode deep into an obscure, supersonic well, was emblematic of his adventurous, effervescent, and endlessly captivating style. We haven’t heard the last from Mr. Monaco.

The evening’s one moment of strangeness was when Pat temporarily dismissed the band and invited his wife, Ayako, to play a couple numbers with him. I couldn’t get my head around that move until I thought, “This guy has basically been on the road for 45 years and, at this point, the stage is more or less his living room. Why shouldn’t he just sit down with his wife and play a couple tunes for friends?”

Except, of course, the stage is not a living room and we are not his friends, which made this portion of the show either eccentric, endearing, or irritating, depending on where you were at mentally.