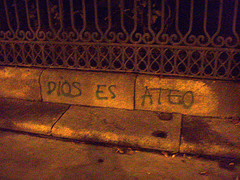 The Church Fathers decided to show that God’s existence, while notoriously resistant to physical proof, could at least be proved “logically.” Descartes and Leibniz followed them in this, to one degree or another. The problem there was, as Kant shewed in Critique of Pure Reason, that logic could provide both proof of God’s existence as well as its opposite. Kant’s aporia pushed the question of existence back into the physical realm (and thus did Kant essentially endorse atheism without explicitly advocating it).

Which brings us back to God vs. Nietzsche. When we read those two sentences, at first we think: “Take that Nietzsche. You are undeniably dead. First round goes to God.”

But we quickly realize that there is a problem. The words, “Nietzsche is dead,” are clearly a statement of fact. The statement “God is dead,” on the other hand, does not strike us as factual but, instead, as some kind of rhetorical provocation. Why is this?

The first issue is the “grammar,” as Wittgenstein called it, of the word “God.” To say “God is dead” doesn’t make sense because “being dead” is not part of God’s grammar. God simply can’t be dead; the sentence seizes up semantically.

The non-sensical nature of “God is dead” raises another question, however: Is God “alive”? Not being dead means always being alive, right? Would it make sense to say, “This animal is not dead, but it is also not alive”? Would it make more sense to say it of God?

This is the brilliance of the “God is dead” motif which, we must recall, is not a proclamation of atheism so much as a heretical claim from within the horizon of theism itself. I call it brilliant because, by granting God’s existence, this phrase doesn’t invite God’s partisans to demonstrate His existence so much as prove that He is still alive. To do so, however, is naturally far more difficult, for, as it turns out, God is not alive in the same sense that living things are alive (though, as we shall see, He may be “alive” in the sense that an idea may be).

And yet, for all that, I do believe that there is a way that God actually exists, though it is not a way that will make any believer particularly happy.

Nevertheless, it is also senseless, grammatically speaking, to say that words have no meaning. Of course, they have meaning (or are you simply looking at the screen without reading it?). So, if the meaning does not exist physically, how then does this meaning exist?

The meaning of a word exists in an absolutely relative and contingent way depending both on the structure of the language in which it occurs and the conventions of the community which uses the language. Indeed, the meaning is strongly tied to this usage as Wittgenstein emphasized when he stated that the meaning of word is it’s “use in the language.”

God exists in the same way that the meaning of a word exists. This non-physical, non-localizable entity, “God,” like the meaning of a word, depends on a community for which it serves as a linguistic and, at times, liturgical point of reference. God has no existence independent of this community. In fact, it is as absurd to think in those terms as it is to ask where we might find the meanings of words from long dead and forgotten languages (that of the Rugians, for example).

(Note: The non-existence of God may be the only thing that makes the plurality of religions, similar to that of languages, possible. If there were a God, any god, then His religion would be as universal as mathematics or physics. Instead, and in spite of the widespread hegemony of certain faiths, we have a multi-ethnic universe of deities and an incredible regional diversity of worshipful practice in even the most catholic of creeds.)

Long story short, I would restate my atheism along the following lines: It is not so much that God doesn’t exist, but that the word “God”does not refer to any physical object existing in space. (The word does, however, refer to an elaborate semantic web produced by the dense interplay of texts, practices, places, physical objects, as well as human thoughts, emotions, and psychological states.)

Of course, we see this, if we look hard enough, in my epigraph. Nietzsche was, without a doubt, the author of his dictum. Likewise, some anonymous human was indubitably the author of God’s.