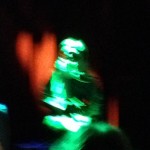 It’s not the case that Tinariwen just happens to be from an African nation that is well on its way to “failed state” status. They have expressed support for Tuareg autonomy in the recent troubles and in fact have been part of Tuareg resistance to the Malian government for decades now. That government executed the father of their leader, Ibrahim Ag Alhabib, back in 1963 and Ag Alhabib went on to receive military training—along with singer Ali Hassan Ag Touhami and the great guitarist/singer, Abdallah Ag Alhousseyni—from Gaddafi back in the 80s.

The proximity to current events in Mali was brought home by the absence Saturday night of Ag Alhabib, who has reportedly been stranded in a refugee camp near the Algerian border since February. When I saw Tinariwen last year, Ag Alhabib made a real impression on me. Tall and impassive, he was a true presence, a totemic reminder of the vast distance between that stage in Allston and the desert world, nomadic life and wrenching political turmoil which gave birth to the enchanting, haunted music the band plays.

Ignorant as I was, I waited for him to walk on stage as he had in the past, instantly altering the dynamic and lending the loping, hypnotic groove an uncanny, brooding focus. When it became clear that this would not occur, I have to admit that I was disappointed—not because the group played poorly or were anything less than captivating, but because any day on which the messiah fails to appear, no matter how amazing or fulfilling that day may be, leaves the believer, who patient attends the end of time, the advent of the miraculous and the dawning of a new age, unsatisfied.

Shai Hulud and the Global Gangsta

Still, Tinariwen played and the music was, as ever, entrancing. Each song consists of a pulse, some kind of arabesque guitar filigree and long, call-and-response lines sung in Tamesheq (and sometimes French, I believe). Lead guitar and vocal duties were shared mainly between Ag Alhousseyni, who played beautiful and skittery figures on acoustic guitar and led the band in jams that were a sub-Saharan mix of Hot Tuna and the Velvet Underground, and Abdallah Ag Lamida, whose guitar playing rocked a bit harder and mined a more primitivist, Neil Young meets Keith Richards vein.

As garage-y as the guitars were and as spirited and melancholy the singing, what gets inside your mind and lingers for days after seeing Tinariwen is the sauntering, nomadic, tribal rhythm. The masters of this rhythm were drummer Sayid Ag Ayad, who played djembe but also calabash, and bassist Eyadou Ag Leche, whose playing alternated between a throbbing, propulsive thump and more fluid, water-running-from-the-living-rock riffs. He continually surprised and amazed me.

Given the Western elements in their music, at times one could have been forgiven for seeing in Tinariwen something like a Dune tribute band murmuring hymns to spice and Shai Hulud—worm-riding music aimed like a jeweled dagger at the heart of the Emperor and his Sardaukar legions.

At other times, though, I could also see this music belonging to the tradition of criminal folk music à la gangsta rap or narcocorrido. While the members of Tinariwen may not be criminals (though the Malian government refers to their Tuareg kinsmen as bandits and drug dealers), they are (or have been) rebels and fighters in a hot conflict that is going on even as I write this.

Indeed, in a moment of paranoid anxiety right before the show started, I wondered if perhaps the conflict would follow the band into the Paradise. In Mali, these men have enemies, I thought, why should this Saturday night, first world rock club be immune to the sudden and devastating violence that so frequently wracks the third world from which these men hail?

And while there was an air of mystery (even menace?) about the perpetually veiled rhythm guitar player, Elaga Ag Hamid—whose playing, by the way, a constant, droning, distorted strum punctuated by power chords, was atmospheric and ineffable—the evening ended, of course, without bloodshed.

This world is strange. It was strange to see and hear these men clad in their native garb conjuring the dunes and distant drums of war on that stage in Boston. While I enjoyed seeing them, I couldn’t shake the dissonance between this enjoyment and my knowledge of where these guys have been, where some of them are now, and the uncertainty surrounding the future of their people, their country and their struggle.

I also marvel still at the effect their music had on the assembled crowd of hipsters, hippies, rastas and others. As the night wore on, I became aware of how many of us were clapping, swaying and dancing to the music. It reminded me of the pre-historic origins of music and how the assumption of a shared rhythm binds groups together, makes of them a community, a people.

For this reason, I would have to say that my experience of Tinariwen was religious. It had its spiritual elements, to be sure—and, I must say, at times my mind was consumed with thoughts of The Most High—but it was absolutely religious in the root sense of that word as characterizing “a bond between man and the gods.” In this music, in these rhythms, in this place, on this world, we were bound together by this music.

Such a bond brought with it a sense of refuge, shelter, peace. May these men, their families and their people, too, someday, find and know the peace their music makes.