This is the second part of a textual reconstruction of a talk I gave on Benjamin at SUNY Albany.

After setting things up in the first part of my presentation on Benjamin and Twitter, and demonstrating how the cyberflâneur was alive and well on “the street” of Twitter, I went looking for Walter Benjamin there as well.

As it turns out, several people have set up accounts such as this, which intermittently posts Benjamin quotes, but someone also went to the trouble of setting up this short-lived parody account:

Aside from the comedic value of this account’s first tweet—”…the character of the age, distilled into the 140-character aphorism, explodes the character of the here-and-now…—I was struck by Twitter’s characterization, as you will note in the lower left-hand corner, of the Dalai Lama as “similar” to Benjamin.

I was struck by this in part due to the exceedingly reverential tone of the conference at which I was presenting. When I got up to speak, I had not, to that point, heard a single criticism of Benjamin uttered (though on the panel following mine, Tom Cohen did indeed raise some doubts about Benjamin’s take on Klee’s angel and the “Theses on the Philosophy of History” more generally).

Was Benjamin never wrong? Was their nothing contradictory or incompletely conceived in his philosophy?  Certainly, statements such as, “The past can be seized only as an image which flashes up at the instant when it can be recognized, and is never seen again,” or, “The intoxicating interpenetration of street and apartment… has prophetic value,” are intriguing, even poetic, but are they true? Helpful? Useful?

In fact, it’s not at all difficult to identify questionable moments in Benjamin’s thought. To choose one example, consider the final lines of the “Afterword” to the essay on art and technical reproducibility: “Thus the aestheticization of politics which fascism undertakes. Communism responds with the politicization of art.” These lines have always struck me as forced and demonstrable false.

What is one to make of this vulgar and vaguely materialistic hyperbole? It’s various historical, rhetorical and political problems aside, the statement suffers from simply not being true. While there are many other examples I could site, one need look no further than the social media to find a highly complex mobilization of diverse, globalized technologies that preserve “existing property relations” [whatever that’s supposed to mean] and yet do not involve violence on a massive scale. (Which is not to say that war has nothing to do with social media. As I will show in Part 3, war is a critical element of social content and, in fact, the social media help further aestheticize it.)

My point is not, however, that we need to question Benjamin more closely and evaluate his work and legacy more critically. Rather, I believe that the reluctance to criticize Benjamin’s work mirrors a reluctance to thematize the reality of his life and death, the fact that he failed to secure an academic position, and the curious fact that, despite this failure, his work has itself launched and sustained a number of academic careers.

In addition to the @WalterBenjamin accounts cited above, one also finds Benjamin mentioned frequently on Twitter. As a matter of fact, by my reckoning, on any given day there are a couple mentions of Benjamin each hour. Some are humorous, such as this one: 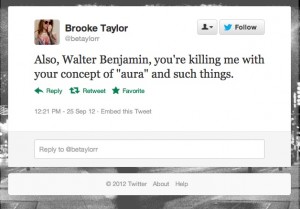 Or this one linking mass consumption and murder (by a PhD candidate in Toronto “studying encounters with the divine in Early Modern literature”): 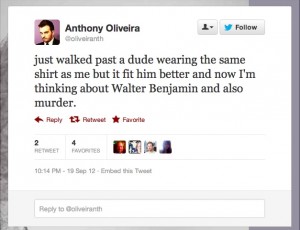 Or this one regarding a critical comment Herzog made about Benjamin: 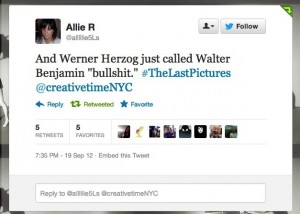 But this one resonated with me particularly because it referred not to Benjamin’s work but to his relationship with academia: 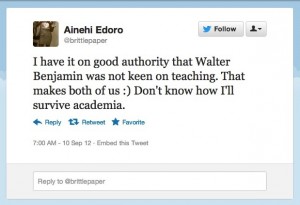 The flipside of the reverence, often unreflected, shown towards Benjamin’s writing and thought, is the repression of Benjamin’s lived reality. He did not survive academia, as we know. He also frequented prostitutes and took drugs. His post academic life was fraught with frustration and persecution and ended in suicide (the 82nd anniversary of which occurred two days before the conference started).

Granted, writing about the biographical details of a man who died long ago is not as simple as writing about this words. Still, I believe this repression hinted at something other than the resistance of lived experience to theorization or linguistic reduction. Rather, I could not but connect it to a repression of the lived reality of the scholars assembled in the room, many of whom were struggling in term-limited or adjunct appointments or else working towards graduate degrees without any definite prospect of an academic appointment on the other side of their travails.

This repression stems, in part, from the deep ambivalence harbored by those in the humanities towards the world beyond the society of letters. While some may be critical of this world by adorning their works with Marxist trappings (as I believe Benjamin himself did—as I told people at the conference, “I don’t really buy Benjamin’s Marxism”), there is the sense that, when engaged in humanistic study, one is set apart and, in a way, spared.

And yet, an anxiety towards this world persists, in part because one realizes that figures of admiration and even idolatry, such as Benjamin, were not themselves spared. Indeed, they were crushed by the cold, hard weight of the real.

As a salve, one forgets Benjamin’s actual tribulations—or cites them coloristically as an ornament of close reading—and focuses instead on his canonization. In the figure of this brilliant failure rests the wish slumbering in the breast of all those who toil in the humanities, “I may not make it. I may not get tenure or even a professorship. But maybe, like Benjamin, my work will be discovered after my death. My brilliance will then be recognized and, who knows, it’s possible that an entire critical industry will grow up around it.”

Unfortunately, all of these people, without exception, will not become a Benjamin. They are not as brilliant as he. They do not have a champion as prominent as Adorno to make their work, such as it is, known to the wider (primarily academic) world. But, most importantly, literate, philosophical reflections, no matter how brilliantly or obscurely stated, on culture high and low, no longer offer a path to prominence, academic or otherwise.

Still, one must go on. And perhaps we can find in Benjamin’s experience, before night descended on Europe and drove him to his death, some hope for life after academia, for survival. After all, the work for which Benjamin was best known was not written under the auspices of academe and it’s quite possible that this “outsider-ness” is what actually made is work possible.

I will address this and other matters in Part 3 of this reconstruction.