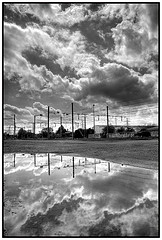 Finally, and along the same lines, I take issue with the figurative use of the term “insurrection” when speaking of Heidegger’s appropriation of Hölderlin, especially given the poet’s known Jacobin sympathies. Specifically, when insurrection becomes solely metaphorical, it is not the poetical that is repressed, but the political.

For Heidegger, poetry is not part of a philosophical project so much as a political, or, more specifically, a nation-building one. According to his lectures on Hölderlin from the mid-30’s (i.e, deep in the Nazi-time) the three figures that play the greatest role in the life of the nation are the Poet, the Thinker, and the Founder of the Nation [Dichter, Denker, und Staatsgründer]. The poet provides the sublime cultural veneer to the polis informed by the thinker (Heidegger) and led by the founder (um, Hitler). Heidegger looks to Hölderlin to play such a role for the emergent Reich.

To this nefarious end, Heidegger is undeniably aided by what is Byzantine and portentous in Hölderlin’s verse. Indeed, “the insurrection of poetry,” its innate resistance to overly prescriptive hermeneutic reduction, actually gives Heidegger the wiggle-room needed to turn the poet’s words against his admittedly obscure and practically esoteric intentions.

This wiggle room is constricted, however, by the line “Many dread getting down to the source,” the source namely of “riches.” For all its “poetic” evocation of natural beauty, the poem in question does not look to nature for solace or significance. These rather are found in the deeds of men and the revivifying strength of community.

To whit, we have the maritime exploits of the departed friends and fellow-travelers, whose commitment to the sea suggests a liberation from the distracting intoxications of Europe’s moribund, absolutist courts, and we have the work of the poets, who bequeath to future generations the memories, not to mention cultural and intellectual capital, “what remain.”

Anyway, not sure what precisely stuck in my craw about this whole thing. Maybe it’s just that, twelve years after leaving academe’s many ivied halls, I was surprised, and even saddened, to see that the internecine disputes of the hyper-educated (among whom I number myself) remain, to this day, little more than erudite parlor games played out in a hermetically sealed and wirklichkeitsfern void.

Or so it would seem to the aging and embittered eyes of this erstwhile “theory gluehead.”

Now, for the benefit of those who cannot or will not read “Andenken” in the original German, I offer my journeyman’s reworking of it auf Englisch:

Think On It – Friedrich Hölderlin

The nor’easter blows,
Dearest of the winds
To me, because fiery spirit
And good voyage he promises the sailors.
Go but now and greet
The beautiful Garonne,
And the gardens of Bourdeaux
There, where along the edged embankment
Passes the gangway and into the current
Deep-plunges the brook, over it but
Gazes a noble pair
Of oak and silver poplar.

Still seems it well to me and like
The broad peaks bent by
The Ulm-wood, over the mill,
In the courtyard grows a bo tree.
On celebration-days go
The brown women in said place
On silken floor,
In middle-March,
When equal are day and night,
And across slow bridges,
Heavy with golden dreams,
Gently rocking breezes blow.

One but offers,
Full of obscure light,
To me the fragrant beaker,
Where-with I may rest; for sweet
Would be slumber ‘neath shadows.
It’s no good,
Soullessly from mortal
Thoughts to be. Good however
Is a conversation and to say
The heart’s opinion, to hear much
Of days of love,
And deeds, which happened.

Where though are the friends? Bellarmin
With the fellow-traveller? Many
Dread getting down to the source;
Wealth namely begins
In the sea. They,
Like painters, bring together
The beauty of the Earth and spurn
Not the winged war, and
To dwell alone, year-long, under
The leafless mast, where gleams through the night neither
The celebrations of the city,
Nor plucked strings and native dance.

Now but to the Indies are
The men gone,
Nigh to the lofty peak
Of purple mountains, wherefrom
The Dordogne comes,
And together with the magnificent
Garonne sea-wide
Streams out the tide. It takes though
And gives memory, the sea,
And love also diligently draws the eye,
What remains, however, the poets bequeath.